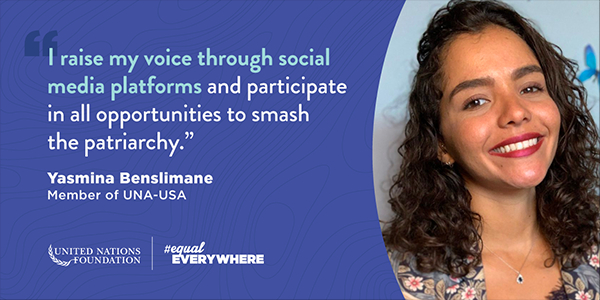 Meet Yasmina Benslimane. She has witnessed firsthand in her home country, Morocco, how oppressive laws can affect women and force them to remain silent out of fear of breaking the status quo.

That’s why she’s stepping up for #EqualEverywhere. Today, Yasmina is a member of the United Nations Association of the USA, and a human rights activist who founded Politics4Her.

It’s a feminist, youth-led blog that reinforces one main message: All politics must include girls and women. (Yes!)

“I am seeing countless young women inspired,” she says. “And I am seeing many more wanting to join the fight. I am seeing women raising their voices and not being scared of breaking the status quo.”

And breaking the status quo isn’t new to Yasmina. She has helped lead a movement aimed at breaking stereotypes, including women’s voices in social, political, and economic decision-making, and setting them on paths to live out their full potential everywhere.

“My wish is to see as many women as possible in leadership positions,” she says. “The more we see women at the top, the more young women will get inspired and know that they can do it, too.”

You can be a leader in the fight for gender equality, too. Take the #EqualEverywhere pledge today to raise your hand and be a leader.

Devastatingly pervasive: 1 in 3 women globally experience violence
Younger women among those most at risk: WHO
9 March 2021 Joint News Release GENEVA | NEW YORK Reading time: 5 min (1248 words)
العربية
中文
Français
Русский
Español
Português
Violence against women remains devastatingly pervasive and starts alarmingly young, shows new data from WHO and partners. Across their lifetime, 1 in 3 women, around 736 million, are subjected to physical or sexual violence by an intimate partner or sexual violence from a non-partner – a number that has remained largely unchanged over the past decade.

This violence starts early: 1 in 4 young women (aged 15-24 years) who have been in a relationship will have already experienced violence by an intimate partner by the time they reach their mid-twenties.

“Violence against women is endemic in every country and culture, causing harm to millions of women and their families, and has been exacerbated by the COVID-19 pandemic,” said Dr Tedros Adhanom Ghebreyesus, WHO Director-General. “But unlike COVID-19, violence against women cannot be stopped with a vaccine. We can only fight it with deep-rooted and sustained efforts – by governments, communities and individuals – to change harmful attitudes, improve access to opportunities and services for women and girls, and foster healthy and mutually respectful relationships.”

Intimate partner violence is by far the most prevalent form of violence against women globally (affecting around 641 million). However, 6% of women globally report being sexually assaulted by someone other than their husband or partner. Given the high levels of stigma and under-reporting of sexual abuse, the true figure is likely to be significantly higher.

Emergencies exacerbate violence, increasing vulnerability and risks
This report presents data from the largest ever study of the prevalence of violence against women, conducted by WHO on behalf of a special working group of the United Nations. Based on data from 2000 to 2018, it updates previous estimates released in 2013.

While the numbers reveal already alarmingly high rates of violence against women and girls, they do not reflect the ongoing impact of the COVID-19 pandemic.

WHO and partners warn that the COVID-19 pandemic has further increased women’s exposure to violence, as a result of measures such as lockdowns and disruptions to vital support services.

“It’s deeply disturbing that this pervasive violence by men against women not only persists unchanged, but is at its worst for young women aged 15-24 who may also be young mothers. And that was the situation before the pandemic stay-at home orders. We know that the multiple impacts of COVID-19 have triggered a “shadow pandemic” of increased reported violence of all kinds against women and girls,” said UN Women Executive Director Phumzile Mlambo-Ngcuka. “Every government should be taking strong, proactive steps to address this, and involving women in doing so”, she added.

Though many countries have seen increased reporting of intimate partner violence to helplines, police, health workers, teachers, and other service providers during lockdowns, the full impact of the pandemic on prevalence will only be established as surveys are resumed, the report notes.

Inequities are a leading risk factor for violence against women
Violence disproportionately affects women living in low- and lower-middle-income countries. An estimated 37% of women living in the poorest countries have experienced physical and/or sexual intimate partner violence in their life, with some of these countries having a prevalence as high as 1 in 2.

Younger women are at highest risk for recent violence. Among those who have been in a relationship, the highest rates (16%) of intimate partner violence in the past 12 months occurred among young women aged between 15 and 24.

Violence against women must be prevented
Violence – in all its forms – can have an impact on a woman’s health and well-being throughout the rest of her life – even long after the violence may have ended. It is associated with increased risk of injuries, depression, anxiety disorders, unplanned pregnancies, sexually-transmitted infections including HIV and many other health problems. It has impacts on society as a whole and comes with tremendous costs, impacting national budgets and overall development.

“To address violence against women, there’s an urgent need to reduce stigma around this issue, train health professionals to interview survivors with compassion, and dismantle the foundations of gender inequality,” said Dr Claudia Garcia-Moreno of WHO. “Interventions with adolescents and young people to foster gender equality and gender-equitable attitudes are also vital.”

Countries should honour their commitments to increased and strong political will and leadership to tackle violence against women in all its forms, through:

Sound gender transformative policies, from policies around childcare to equal pay, and laws that support gender equality,
A strengthened health system response that ensures access to survivor-centred care and referral to other services as needed,
School and educational interventions to challenge discriminatory attitudes and beliefs, including comprehensive sexuality education,
Targeted investment in sustainable and effective evidence-based prevention strategies at local, national, regional and global levels, and
Strengthening data collection and investing in high quality surveys on violence against women and improving measurement of the different forms of violence experienced by women, including those who are most marginalized.

To access the report and related materials for media, please go to: https://who.canto.global/b/QR99R

About the report
The report, Global, regional and national estimates for intimate partner violence against women and global and regional estimates for non-partner sexual violence against women was developed by WHO and the UNDP-UNFPA-UNICEF-WHO-World Bank Special Programme of Research, Development and Research Training in Human Reproduction (HRP) for the United Nations Inter-Agency Working Group on Violence Against Women Estimation and Data.

The Working Group includes representatives from WHO, UN Women, UNICEF, UNFPA, the United Nations Office on Drugs and Crime (UNODC) and the United Nations Statistics Division (UNSD) to strengthen the measurement and monitoring and reporting of violence against women, including for the purposes of monitoring the related indicators of the Sustainable Development Goals (SDGs).

National data collection on intimate partner violence has increased significantly since the previous 2010 estimates, although challenges remain with data quality and availability. Sexual violence, in particular, remains one of the most taboo and stigmatizing forms, and hence continues to be vastly underreported.

Financial support for the analysis and report was provided by the Foreign, Commonwealth and Development Office of the United Kingdom.

Lifetime prevalence of intimate partner violence among women aged 15-49 among the United Nations SDG regional and subregion classifications, the rates were as follows: